25 °C
View Round the world on jamesandanita's travel map.

And now for the second part of our Caribbean adventure. We picked up our trusty (well, ish - see later) vessel in Le Marin, at the southern end of Martinique. After a few delays in the morning - a few last minute fixes to the boat from Kiriacoulis and a wait to clear customs for exiting Martinique (the first of many customs clearances in the next week) - Anita and James finally made it out of Marin. It was the first time James had skippered with just one crew and it was pretty windy; on our way out we passed a wrecked yacht that can't have been that far off the size of ours - this didn't exactly inspire confidence... 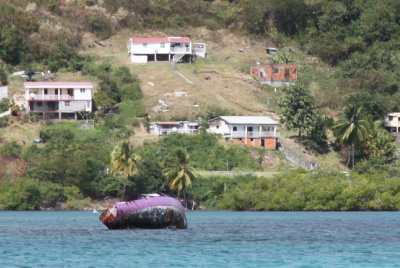 Fortunately given the late start we made good time, and arrived in Soufriere around 5pm. This is where we were meeting up with the rest of our crew for the week: Lucy, Becky, Mark, and Kat (friends from uni and work). As we pulled into Soufriere bay, overlooked by the towering Pitons (the two tallest mountains on Saint Lucia, rising straight out of the sea and up to nearly 1km), we got our first taste of the 'welcoming committees', or 'boat boys'. It turns out that as you enter any anchorage / harbour in a yacht, you get accosted by at least one (often more) guys in a small speed boat offering to take you to a mooring ball, or help you find a spot to anchor. Basically think a much more insistent version of valet parking. Needless to say this isn't a free service, and they'll hang off the side of your boat, refusing to take no as an answer. 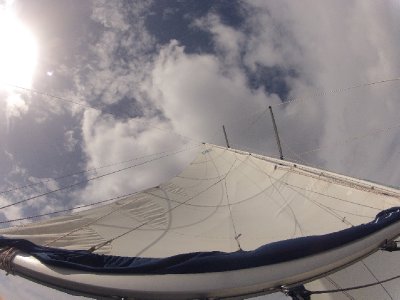 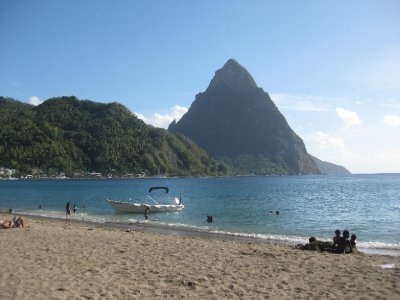 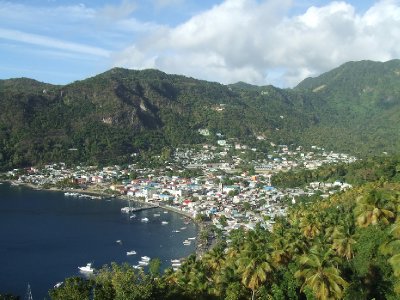 Anyway we met up with everyone there, proceeded to faff a little with customs (we neglected to pay the standard 'overtime' fee which they tend to like to levy and just waited for the morning instead), and had a nice dinner on board. The town was pretty lively, and as luck/fate would have it we had moored very close to a late night karaoke bar. That meant we were treated to mostly Bob Marley (which it seems comprises about 90% of all music played in Saint Lucia) strangely interspersed with probably the worst rendition of Celine Dion's 'My Heart Will go on' we've ever heard (and the bar isn't exactly set high on that one) and a lot of country and western.

The next morning, after not the best night of sleep due to the karaoke, and further customs faffing we sailed our longest day; over 50 miles down to Bequia. There was plenty of wind and swell so our journey was not without sea sickness casualties. It is fair to say that by the end of that day we were all pretty tired and hoping we had broken the back of the sailing. Bequia itself was pretty nice, we moored in the bay and went ashore for dinner. For the second night running we were entertained by some raucous karaoke (which seems to be the national pastime in the islands), by then we were more in the mood thanks to the strong local rum though...

We saw our first pirate-looking ship just off Bequia, so could feel we were coming into pirate country... 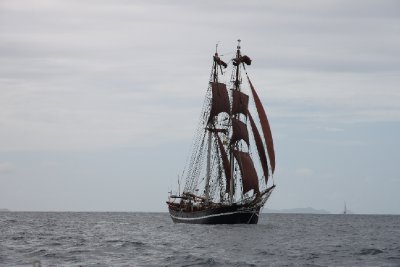 And after yet more faffing with customs as we'd now crossed into the Grenadines and waiting ages for water (thank you Kiriacoulis for neglecting to bother filling the tanks), we headed down to our most southerly point - Tobago Cays. It was here that everything changed. We found ourselves in the promised land: turquoise waters, sandy beaches, stunning islets. Tobago Cays is a national park only accessible by yacht, so it was just a small village of boats and some turtles for company. This was also the most intense anchorage any of us had ever experienced as the currents were stupendous; had we dived off the boat we'd probably have surfaced in Cuba. 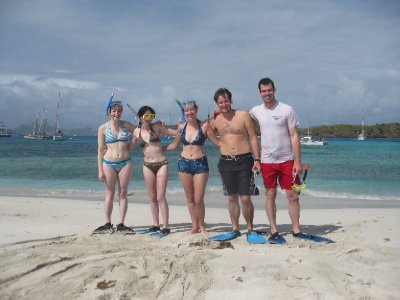 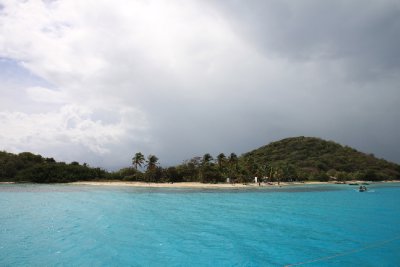 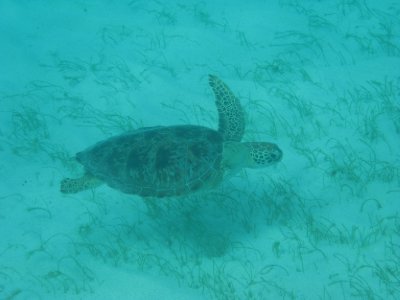 Once we were done swimming with fish, rays and turtles we trundled up to Mustique in the boat. Yes, the Mustique which houses villas for Jagger, Princess Margaret, etc. In a major stroke of luck, it was the closing night of the annual Blues festival so us and a bunch of megarich types boogied away till the early hours at Basil's Bar. We got given the discreet corner table at which Will & Kate had dined but a fortnight before, or so the waiter told us. This was great fun as all the super rich people kept staring in our corner trying to work out who we were. 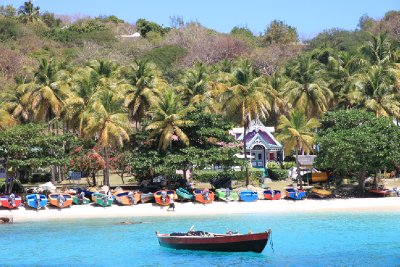 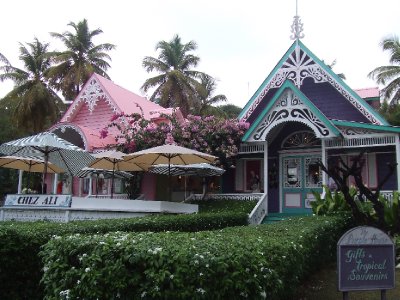 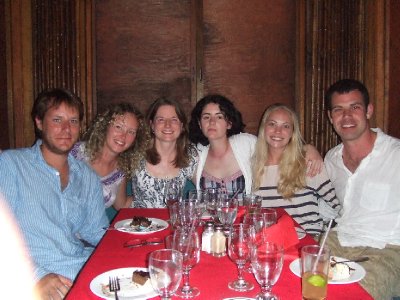 Any delusions of grandeur were swiftly cast away when on leaving Basil's to go back to the boat we found our poor excuse for a dinghy had sunk, leaving our outboard motor drifting in the surf. Our heroic skipper realised there was no choice but to strip down to his boxers and wade into the dark sea to rescue various parts sitting on the ocean floor, with the help of Mustique's security team to shine a light. James and Mark then had to row back with only one passenger as quickly as they could in a race to beat the puncture from again sinking the dinghy.

Lucy, our damsel in distress, then managed to secure passage on the tender of an enormous megayacht for the remaining three girls. Their 'dinghy' had a crew of three and was about 30' long. For reasons unexplained, the wives of the older men who had kindly offered us a lift seemed not to warm to us and went and sat at the other end of the boat, but we found that the men were delighted to slurringly tell us they enjoyed being chivalrous. They all cheered and commended James and Mark when they saw them returning to rescue us in the inky dark and managed not to run them over in the dinghy.

Feeling enthused by the warmth of Mustique's 'locals' we thought we'd go ashore the next morning for a swim. I wandered into Basil's and asked where the beach was and yet another kind soul offered us a lift across to Macaroni beach where Mark, James and Kat spent their time bodysurfing in the waves, Rebecca sensibly waded and Lucy and I were continuously flattened. 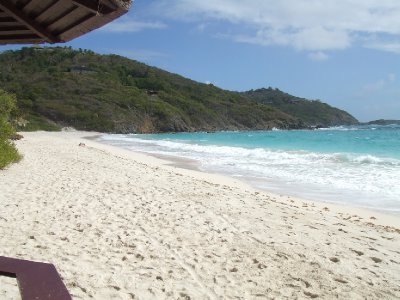 Sad to leave Mustique, we headed up to St. Vincent. This was a tough day of sailing, with 3m side on swells which disturbingly kept on beginning to break. We got very wet, but we made it to Wallilabou Bay, where the set of Pirates of the Caribbean still stands. Not much to say, other than that the set still looks remarkably real even now. We were advised we could swim in the bay but that sometimes when it rained jellyfish appeared. Almost needless to say, we decided to give it a miss (after James's previous experiences with jellyfish)! Wallilabou won the prize for most pushy welcome committees - there were men in rowing boats a couple of miles out to sea using the tactic of pretending to need rescue before telling you they were actually trying to sell you a mooring ball... 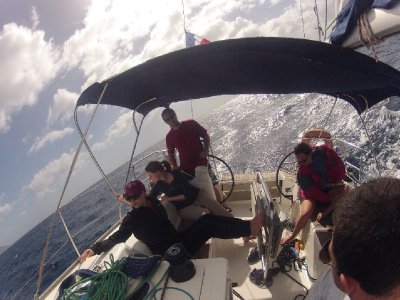 Outside the Pirates of the Caribbean museum, they had some coffins left over from the filming of one of the films - cue the compulsory tourist photo in Johnny Depp's foot steps... 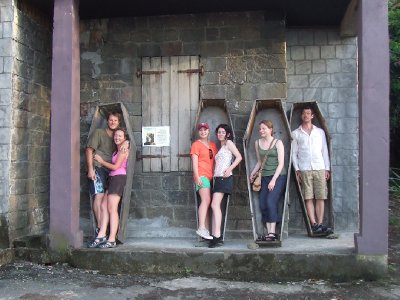 We then sailed back up to Saint Lucia, arriving in the beautiful Marigot Bay and treated ourselves to some tasty local cuisine and quite a lot of local rum. It was a good night from what I remember!

On the last day it was a short hop up to Rodney Bay where the boys went off to play with their kitesurf (an epic fail) and the girls went to the beach. We all got together in the evening for more rum cocktails before sadly parting ways the next day. 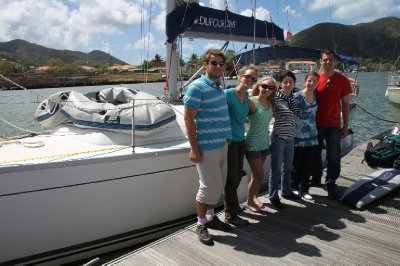 James and I now find ourselves in St. Lucia having rested for a few days, but in the sad knowledge that tomorrow we are going home and our travels will be over. We've had an incredible time and will take with us memories to last our entire lives together. Obviously we're really looking forward to going back, and won't at all miss travelling (ahem...)!

Previous Next Table of contents